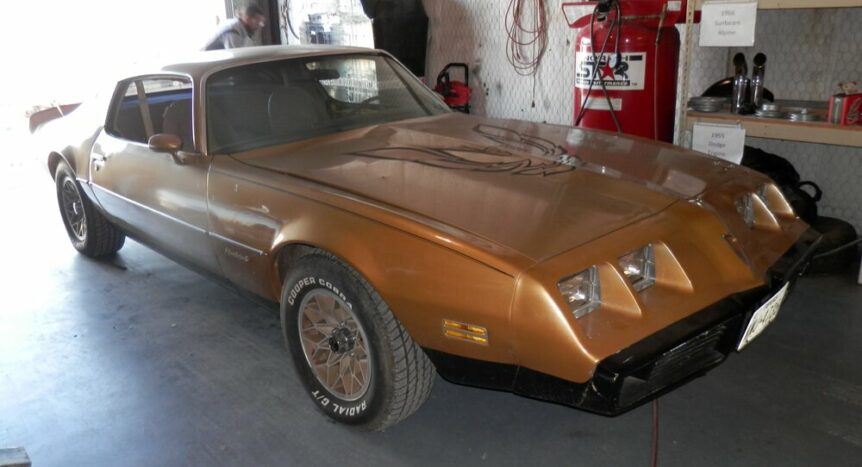 The Pontiac Firebird is an American automobile that was built and produced by Pontiac from the 1967 to 2002 model years. Designed as a pony car to compete with the Ford Mustang and Mercury Cougar, it was introduced on February 23, 1967, simultaneous with GM’s Chevrolet division platform-sharing Camaro. This also coincided with the release of the 1967 Mercury Cougar, Ford’s upscale, platform-sharing version of the Mustang.

The second-generation debut for the 1970 model year was delayed until February 26, 1970, because of tooling and engineering problems; thus, its popular designation as a 1970½ model, while leftover 1969s were listed in early Pontiac literature without a model-year identification. This generation of Firebirds were available in coupe form only; after the 1969 model year, convertibles were not available until 1989.

From 1977 to 1981, the Firebird used four square headlamps, while the Camaro continued to retain the two round headlights that had been shared by both second generation designs. The 1977 Trans-Am Special Edition became famous after being featured in Smokey and the Bandit. The 1980 Turbo model was used for Smokey and the Bandit II.

In the final year of the second-generation Firebirds (1981), Trans-Am still used the same engines as it had in the previous model year, with the only change being the addition of a new electronic carburetion system.

The assembly plant code for Norwood, OH is “N” (from 1972 to 1980 this would be the fifth VIN digit, for 1981 it is the 11th digit), and for Van Nuys, CA it is “L” (for Los Angeles, of which Van Nuys, Los Angeles is a district). In the later second-generation cars, Norwood used lacquer-based paint (there is an “L” on the cowl tag), and Van Nuys used water-based paint (there is a “W” on the cowl tag), due to California’s tightening pollution regulations. The water-based paint often failed and delaminated during the warranty period and subsequently, cars had to be repainted.

Almost done with the teardown and cleaning out the interior.

The front clip has been disassembled in prep for engine removal and the new paint job.

Getting ready to remove the engine and transmission.

Disassembled the seats to check the frames for rust and prepare for new custom upholstery. Neutralized

The engine has completely removed.

The interior has been completely taken apart.

Removed the rust and neutralized the seat frames.

Post media blast for the body of the car and fenders, doors and deck lid.

Doing some metal work on the passenger door.

Having to do some small metal repair around the body.

Cut out some old rusted metal that needed to be replaced with a new metal patch.

The body is in the paint booth ready to be epoxy sealed.

The body has been epoxy sealed

The new LS3 engine and transmission has arrived.

The frames of the seats have been painted.

The new engine mounts have been installed.

We have installed the new LS3 engine.

The new disc brakes have been installed

Working on cutting out the patterns to sew them for the seats.

After cutting out the patterns, we have glued it to foam.

In the center of the seats we have this detailed diamond stitching.

In the center of the seats we have this detailed diamond stitching.

Sewing the cut out pieces together.

The pieces of leather have been sewn together to make the seats forms.

The seat upholstery has been completed.

Doing some body work on the drivers door.

We have prepped the car to spray with primer.

The body, doors and deck lid have been sprayed with primer.

Block sanding the body to prepare it for sealer.

Mocked up the radiator and cooling fan.

The wiring harness in the trunk has been cleaned up.

The front bumper cover has been installed.

Working on building the dash gauges.

The engine has been removed and the firewall has been cleared in preparation for paint.

Working on making the body smooth for the custom paint job.

We have moved the body into the paint booth to prepare for the new paint.

We have gotten the body painted black.

The interiors of the hood, deck lid and doors have been painted black.

Preparing to paint the exteriors of the doors, hood and deck lid.

Dynamat has been installed to help keep the road noise out.

Door and trunk seals have been installed.

Driver’s side window has been installed.

Passenger window has been installed.

We have begun installing the new black carpet.

Beginning the install of the headliner.

We have reinstalled the engine.

We have begun running the wires throughout the engine compartment. The fuse block and ECM have been installed on the firewall.

The coolant tank has been installed beside the radiator.

We have painted the front bumper and hood scoop black.

The rear bumper and taillights have been installed.

The front bumper has been installed.

Installation of the transmission is complete.

Installation of the drive shaft has been completed.

Beginning to install the wiring harness in the dash.

We have gotten the dash installed.