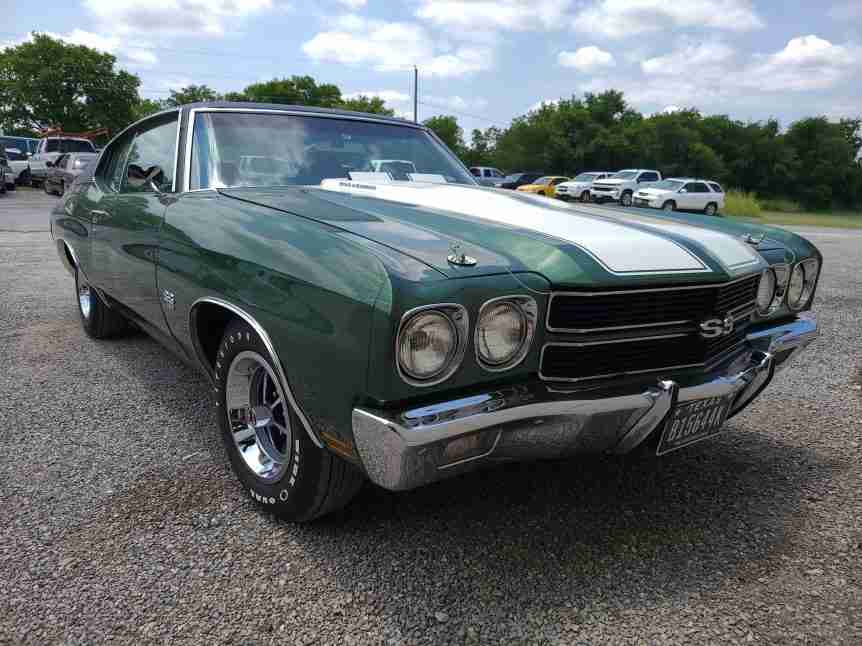 The Chevrolet Chevelle is a mid-sized automobile that was produced by Chevrolet in three generations for the 1964 through 1978 model years. Part of the General Motors (GM) A-body platform, the Chevelle was one of Chevrolet’s most successful nameplates. Body styles included coupes, sedans, convertibles, and station wagons. The “Super Sport” versions were produced through the 1973 model year, and Lagunas from 1973 through 1976.[1]

After a four-year absence, the El Camino was reintroduced as part of the new Chevelle lineup in 1964.

The A-body Monte Carlo, introduced in 1970, also used a platform that was based heavily on the Chevelle platform, although it was lengthened ahead of the firewall.

From 1964 through 1969, GM of Canada sold a modified version of the Chevelle that included a Pontiac style grille and a LeMans instrument panel, marketed as the Beaumont.

The Malibu was the top-of-the-line model through 1972 and completely replaced the Chevelle nameplate starting with the redesigned and downsized 1978 model year.

In 1970, sheet metal revisions gave the bodies a more coke bottle styling, and interiors were also redesigned. The 1970 Chevelle and the 1970 Buick Skylark share the same roofline. The 1970 Chevelle came in Sport Coupe, Sport Sedan, convertible, four-door sedan, a couple of wagons, and coupe utility (the El Camino) body styles. Only three of these (Malibu sport coupe, Malibu convertible, and El Camino pickup) were available with a choice of one of two SS options: RPO Z25 with the SS 396 (402 cid) engine and RPO Z15 with the new 454 cid engine. The base model was now simply called Chevelle in lieu of the former base 300 Deluxe and was only available as a Sport Coupe or four-door sedan. In Canada, the base series retained its 300 Deluxe name, with appropriate badging on each front fender just behind the front wheel well. The 300 Deluxe 2-door sedan was canceled and replaced by the base Chevelle Sport Coupe, a 2 door pillarless hardtop. The hardtop, convertible, and sedan received the upgraded sheet metal, but the station wagons and El Camino retained the previous year’s sheet metal panels (which went on for the next 2 model years). Station wagons were the entry-level Nomad, the Chevelle level Greenbrier, the Malibu level Concours, and an upscale Concours Estate. New options included power door locks and a stalk-mounted wiper control. Production was expanded to the GM Arlington Assembly plant in Arlington, Texas (where the Chevelle was assembled with its corporate siblings in this case the Oldsmobile Cutlass).

This vehicle came in to have the vinyl top removed and have the white stripes continue all the way to the rear.

Removed the vinyl top to sand and prep for paint.

Doing some minor body work to the roof.

Welding in the holes from the vinyl top.

We have sprayed the roof with primer.

Prepping the body by taping off for the new paint.

We have gotten the new paint and white stripes painted on.

Clear coat was sprayed on the vehicle.

The deck lid has been painted and reinstalled on the vehicle.