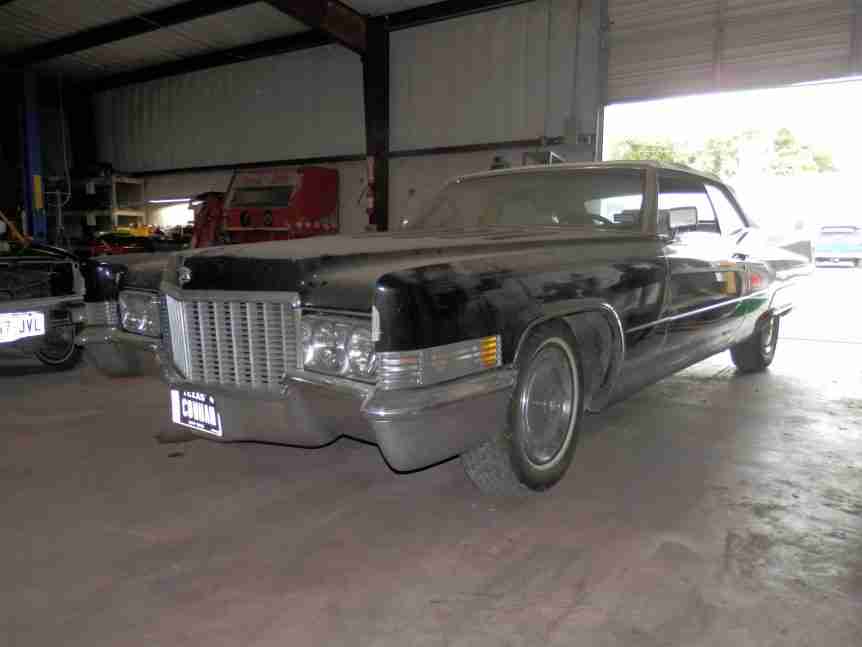 The Cadillac DeVille is the nameplate used by Cadillac over eight generations, originally used to designate a trim level of the 1949 Cadillac Series 62 and later designate a standalone model in the brand range. The last model marketed specifically as a DeVille was the 2005 full-size sedan, at the time, Cadillac’s largest model.

For 2006, the DeVille nameplate was retired, when the model line was carried forward with minor revisions as the Cadillac DTS, using a nomenclature adopted by the Cadillac STS and CTS.

In 1970, a facelift included a grille with 13 vertical blades set against a delicately cross-hatched rectangular opening. The bright metal headlamp surrounds were bordered with body color to give it a more refined look. Narrow vertical “vee” taillights were seen again, but now had additional smaller V-shaped bottom lenses pointing downward below the bumper. Wheel discs and winged crest fender tip emblems were new. Exterior distinctions came from a DeVille script above the rear end of the belt was a body color border around the edge of the vinyl top covering, when this option was ordered. The 1970 model year was both the last year that DeVille offered a convertible body style and for pillared sedans until hardtops were permanently dropped in 1977. A total of 181,719 DeVille’s were sold for that model year, accounting for 76% of all Cadillacs.

We will be fixing the ignition cylinder lock and replacing the rear brake hoses.

Disassembled front brakes to assess what needs to be replaced.

The master cylinder has been drained of the old brake fluid.

We repaired the ignition wire, we also removed the spark plugs, wires and distributer cap.

We have had the brake rotors turned so they can have proper grip.

We have begun rebuilding the front driver side brake.

New spark plugs have been installed.

Under dash cover and the steering column torn down for repairs.