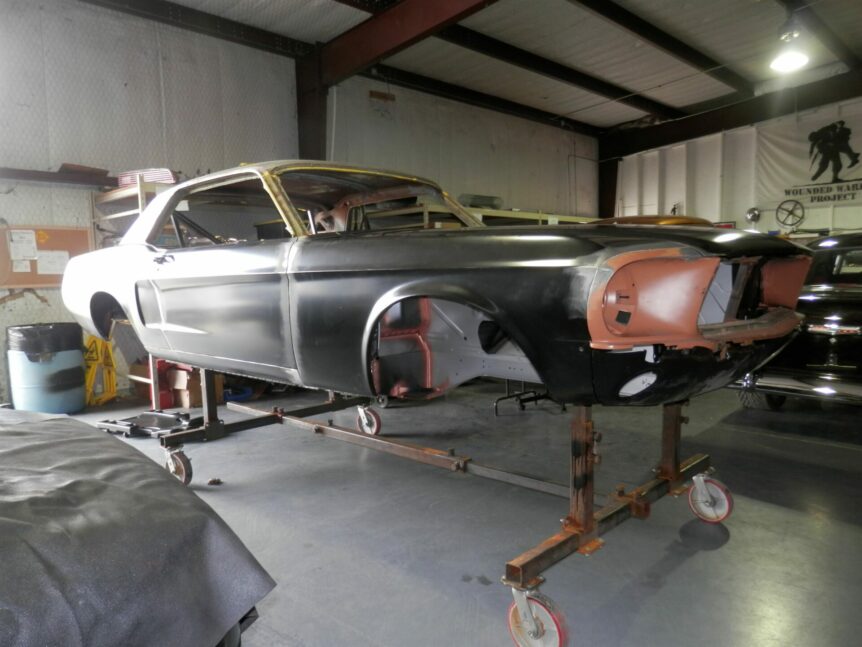 The Ford Mustang is a series of American automobiles manufactured by Ford. In continuous production since 1964, the Mustang is currently the longest-produced Ford car nameplate. Currently in its sixth generation, it is the fifth-best selling Ford car nameplate. The namesake of the “pony car” automobile segment, the Mustang was developed as a highly styled line of sporty coupes and convertibles derived from existing model lines, initially distinguished by “long hood, short deck” proportions.

Originally predicted to sell 100,000 vehicles yearly, the 1965 Mustang became the most successful vehicle launch since the 1927 Model A. Introduced on April 17, 1964 (16 days after the Plymouth Barracuda), over 400,000 units in its first year; the one-millionth Mustang was sold withing two years of its launch. In August 2018, Ford produced the 10-millionth Mustang; matching the first 1965 Mustang, the vehicle was a 2019 Wimbledon White convertible with a V8 engine.

The success of the Mustang launch led to multiple competitors from other American manufacturers, including the Chevrolet Camaro and Pontiac Firebird (1967), AMC Javelin (1968), and Dodge Challenger (1970). The Mustang also had an effect on designs of coupes worldwide, leading to the marketing of the Toyota Celica and Ford Capri in the United States (the latter, by Lincoln-Mercury). The Mercury Couger was launched in 1967 as a unique-bodied higher-trim alternative to the Mustang; during the 1970s, it was repackaged as a personal luxury car.

Ford’s designers began drawing up larger versions even as the original was achieving sales success and while “lacocca later complained about the Mustang’s growth, he did oversee the 1967 redesign.” From 1967 until 1973, the Mustang got bigger but not necessarily more powerful. The Mustang was facelifted, giving that Mustang a more massive look overall and allowing a big block engine to be offered for the first time. Front and rear end styling was more pronounced, and the “twin cove” instrument panel offered a thicker crash pad and larger gauges. Hardtop, fastback and convertible body styles continued as before. Around this time, the Mustang was paired with a Mercury variant, called the Cougar, which used its own styling cues, such as a “power cat” logo and hidden quad headlamps. New safety regulations by the U.S. National Highway Traffic Safety Administration (NHTSA) for 1967 including an energy-absorbing steering column and wheel, 4-way emergency flashers, a dual-circuit hydraulic braking system and softer knobs.

We will be verifying the engine and transmission, also determining if the 4-link can be used. After that we will proceed with completing this Mustang.

Preparing to box in the frame for the new cross member.

The frame has been boxed in completely.

The rotors and brakes have been installed.

We have gotten the cross brace and shatter shield installed.

The installation of the new EFI system and fuel tank has been done.

Beginning to install the new wiring harness in the dash.

Dynamat has been installed to reduce road noise in the vehicle.

The fuel pressure regulator and fuel lines have been installed.

The taillights have been installed.

The fuel door has been installed.

Uncreating the new Coyote engine that will be installed.

Beginning to run the wiring throughout the engine bay.

We had to fabricate the transmission tunnel a little bit.

The sway bar has been installed.

The fabricated transmission tunnel has been painted black.

We had to relocate the master cylinder to the right about 2 inches.

We have begun installing the passenger side header.

We will be relocating the AC lines from the firewall to the wheel well.

Making progress on running the wiring harness throughout the dash.

The fender has been reinstalled.

Engine, headers and power steering reservoir have been installed.

The headlights have been installed.

The radiator has been installed.

The new seat cushions have been custom built out of foam.

The beginning builds of the custom console.

Test fitting the driver’s seat and custom console in the interior of the vehicle.

The start of the fabrication of the storage lid.

We have hidden the AC lines in the wheel well to keep a clean look in the engine bay.

We have begun building the cool air intake system.

The power steering lines have been installed.

The starter is being wired into the wiring harness.

Relocated the battery and the ground wire to the trunk.