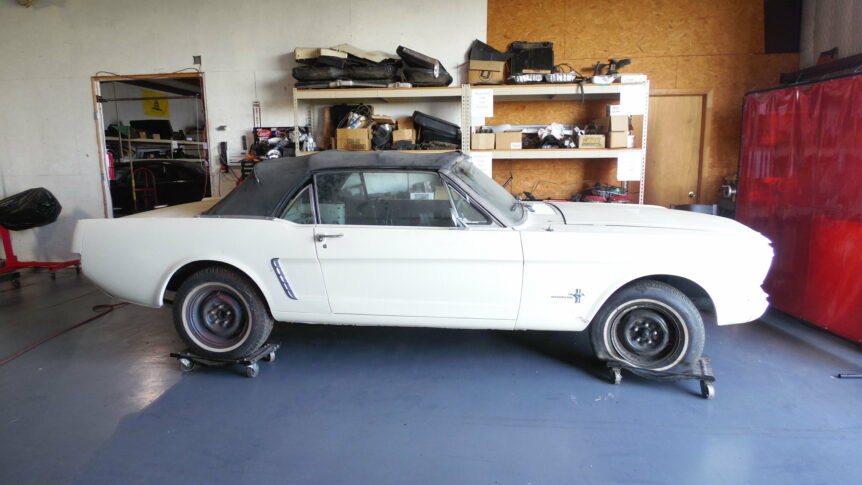 The Ford Mustang is an American car manufactured by Ford. It was originally based on the platform of the second generation North American Ford Falcon, a compact car. The original 1962 Ford Mustang I two-seater concept car had evolved into the 1963 Mustang II four-seater concept car which Ford used to pretest how the public would take interest in the first production Mustang. The 1963 Mustang II concept car was designed with a variation of the production model’s front and rear ends with a rood that was 2.7 inches shorter. Introduced early on April 17, 1964 ( 16 days after the Plymouth Barracuda), and thus dubbed as a )1964 1/2” by Mustang fans, the 1965 Mustang was the automaker’s most successful launch since the Model A. The Mustang has undergone several transformations to its current sixth generation.

In late 1964, Ford contracted Holman & Moody to prepare ten 427-powered Mustangs to contest the National Hot Rod Association’s (NHRA) A/Factory Experimental class in the 1965 drag racing season. Five of these special Mustangs made their competition debut at the 1965 NHRA Winter nationals, where they qualified in the Factory Stock Eliminator class. The car driven by Bill Lawton was the class.

Early Mustangs also proved successful in road racing. The GT 350 R, the race version of the Shelby GT 350, won five of the Sports Car Club of America’s (SCCA) six divisions in 1965. Drivers were Jerry Titus, Bob Johnson and Mark Donohue, and Titus was the (SCCA) B-Production national championship. GT 350s won the B-Production title again in 1966 and 1967. They also won the 1966 manufacturers’ championship in the inaugural SCCA Trans-Am series, and repeated the win the following year.

We will be swapping out the engine and doing a new paint job on it.

We have gotten the fenders, hood and grille removed.

Taking the Mustang to get media blasted.

The hood and fenders have returned from media blast.

We got the body back from media blast this morning.

The Mustang has been epoxy sealed in the booth.

We have the car up on the rotisserie to do some body work.

The new Coyote Power Mustang 5.0L 6 Speed Engine has arrived to the shop.

Removing a section of the toe panel so that we can completely cut out the frame rail.

We are cutting out the shock towers to replace to handle the modern shocks.

The new frame rail has been welded into place.

The inner rocker panels are completely rusted. In order to provide structural support to the vehicle we cut out the remaining rust to replace with brand new rocker panels.

We have completely removed the inner rocker panels.

We are mocking up the new mini tubs in the rear wheel well.

Body work getting done on the hood, driver and passenger doors.

The mini tubs have been completely installed and sealed.

The mini tubs, front inner fenders and undercarriage have been sprayed with rhino liner.

Working on installing the new wiring harness throughout the body of the car.

We have the transmission installed.

We have begun cutting out the patterns and putting stitching in.

Working on the new center console adding cup holders and foam to the lid of the storage compartment.

Mocking up the rear seat delete in the car to make sure everything functions the way it is supposed to.

The speaker box has been framed out.

The rear seat delete has been completely covered in leather with the speakers installed.

The rear trunk panel testing out the lights.

Installing the seat heaters in the seat cushions.

The rims and tires have been installed and the vehicle is back on the ground.

The exhaust pipes have been installed.

We have begun body work on the engine bay, rear quarter panels and doors.

Lining up the hood for a proper fit.

Preparing the rear passenger quarter panel for the new paint.

The body has been sprayed with primer.

Both of the fenders and the doors have been sprayed with primer.

The interiors of the hood, deck lid, both doors and both fenders have been painted Saphirblau Metallic.

We have painted the inner fenders and radiator support Saphirblau Metallic.

The exterior fenders, doors, hood and deck lid have all been painted Saphirblau Metallic.

The radiator and fans are installed, along with starting to install hoses, wires and the horns.

On the driver’s door we have installed the door popper, latch and lock cylinder.

The engine has been installed.

The transmission cross member and driveshaft has been installed.