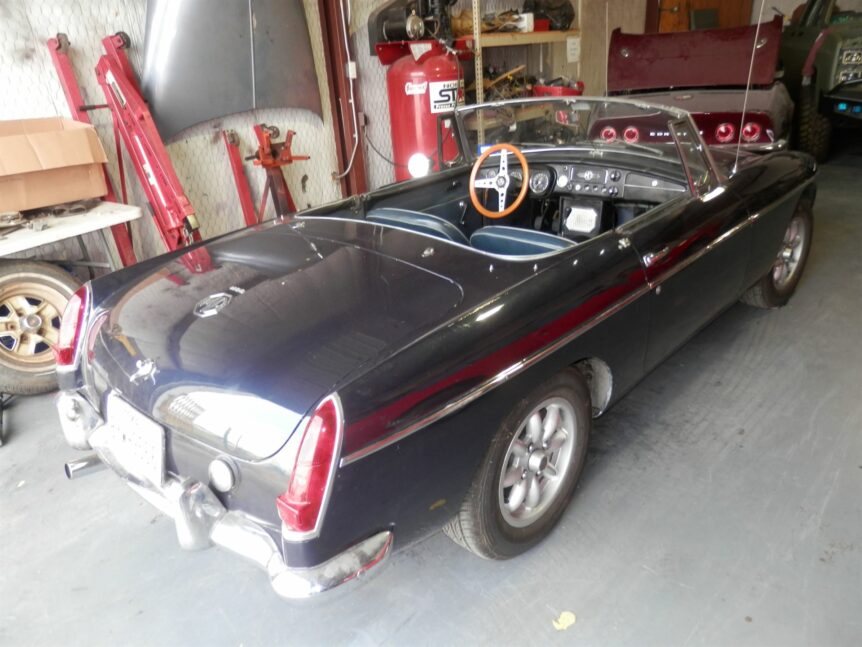 The MGB is a two-door sports car manufactured and marketed from 1962 until 1980 by the British Motor Corporation (BMC), later the Austin-Morris division of British Leyland, as a four-cylinder, soft-top sports car. It was announced and its details first published on 19 September 1962. Variants include the MBG GT three-door 2+2 coupe, (1965-1980), the six-cylinder sports car and coupe MGC (1967-76).

Replacing the MGA in 1962, production of the MGB and its variants continued until 1980. Sales for the MGB, MGC and MGB GT V8 combined totaled 523,836 cars. After a 12-year hiatus, the MGB re-entered production as the heavily modified MG RV8 with a limited run of 2,000 cars before finally being replaced in 1995 by the MGF.

Development of the MGB started at least as early as 1958 with the prototype known by its Abingdon codename; MG EX205. In structure the car was a progressive, modern design in 1962, utilizing a unitary structure, instead of the traditional body-non-frame construction used on both the MGA and MG T-types and the MGB’s rival, the Triumph TR series. However, components such as brakes and suspension were developments of the earlier 1955 MGA, with the B-Series engine having its origins in 1947. The lightweight design reduced manufacturing costs while adding to overall vehicle strength. Wind-up windows were standard, and a comfortable driver’s compartment offered plenty of legroom. A parcel shelf was fitted behind the seats.

The MGB achieved a 0-60 mph (97 km/h) time of just over 11 seconds. The tree-bearing 1,798 cc B-Series engine produced 95 hp (71 kW) at 5,400 rpm – upgraded in October 1964 to a five-bearing crankshaft. From 1975, US-market MGB engines were de-tuned to meet emission standards, ride height was increased by an inch (25 mm), and distinctive rubber bumpers were fitted to meet bumper standards.

On this convertible we will be doing some diagnosing and repairing on the electrical system, a valve cover leak repair and changing the oil system.

We have installed a new choke cable, oil cooler lines and filter.

The new snaps have been installed on the Tooneau cover.