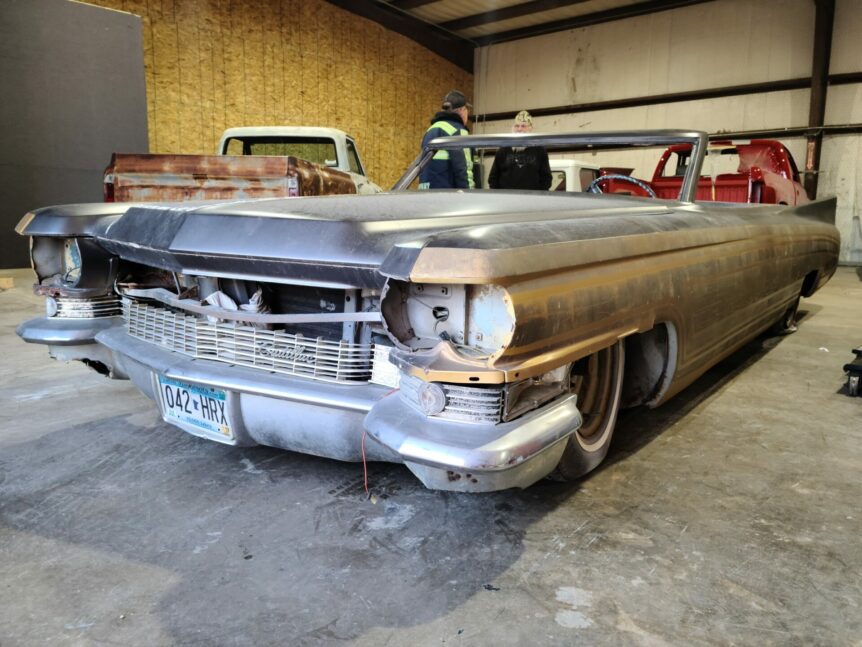 The Cadillac Eldorado is a luxury manufactured and marketed by Cadillac from 1952 to 2002 over twelve generations.

The Eldorado was at or near the top of the Cadillac line. The original 1953 Eldorado convertible was never less than second in price after the Cadillac Series 75 limousine until 1966. Starting in 1967 Eldorado retained its premium position in the Cadillac price structure but was built in high volumes on a unique two door personal luxury car platform.

The Eldorado carried the Fleetwood designation from 1965 through 1972 and was a modern revival of the pre-war Cadillac V-12 and Cadillac V16 roadsters and convertibles.

The Eldorado received a minor facelift for 1964. The main visual cue indicating an Eldorado Biarritz rather than a De Ville convertible was simply the lack of fender skirts. New up front was a bi-angular grille that formed a V-shaped along both its vertical and horizontal planes bisected by a central body-colored horizontal bar. Outer grille extension panels again housed the parking and cornering lamps. It was the 17th consecutive year for the Cadillac tailfins with a new fine-blade design carrying on the tradition. Performance improvements including a larger 429 cubic inch V8 engine were the dominant changes for the model run. Equipment features were same as in 1963 for the most part. Comfort Control, a completely automatic heating and air conditioning system controlled by a dial thermostat on the instrument panel, was introduced as an industry first. The engine was bumped to 429 cu in (7 I), with 340 hp (253.5 kW) available. Performance gains from the new engine showed best in the lower range, at 20 to 50 mph (30 to 80 km/h) traffic driving speeds. A new technical feature was the Turbo-Hydramatic transmission, also used in the De Ville and the Sixty Special. Series 62, 75 and the Commercial Chassis continued with the old Hydra-Matic until 1965.

We will be rebuilding the brakes, replacing the gas tank, remove the old engine and replace with 502 Ram Air Jet engine and also installing air ride suspension.

Preparing the engine to be removed.

The engine has been pulled to prepare the body from the frame.

We have braced the interior of the car to maintain the structural integrity.

The body has been removed from the frame.

The frame has had all parts removed to be media blasted.

The frame, brake drums and parts from off the frame have been media blasted down to bear metal.

We have sprayed the frame and spindle covers black.

The rear upper and lower control arms have been installed, along with the rear axle.

We have assembled the airbags to be installed.

The airbags have been installed on the chassis.

Going to cut out some rust spots from the undercarriage.

Welded in some patch panels for the rust that was cut out.

We have sprayed the undercarriage with Raptor Liner.

We have lowered the body back onto the chassis.

Mocking up the airbag system in the trunk.

We have reinstalled the engine

The accessory drive and starter have been installed on the engine.

We have gotten the transmission cross member has been installed.

We will be replacing the oil pan with a new high performance oil pan.

We ended up having to modify the windage tray due to fitment issues.

The new high performance oil pan has been installed.