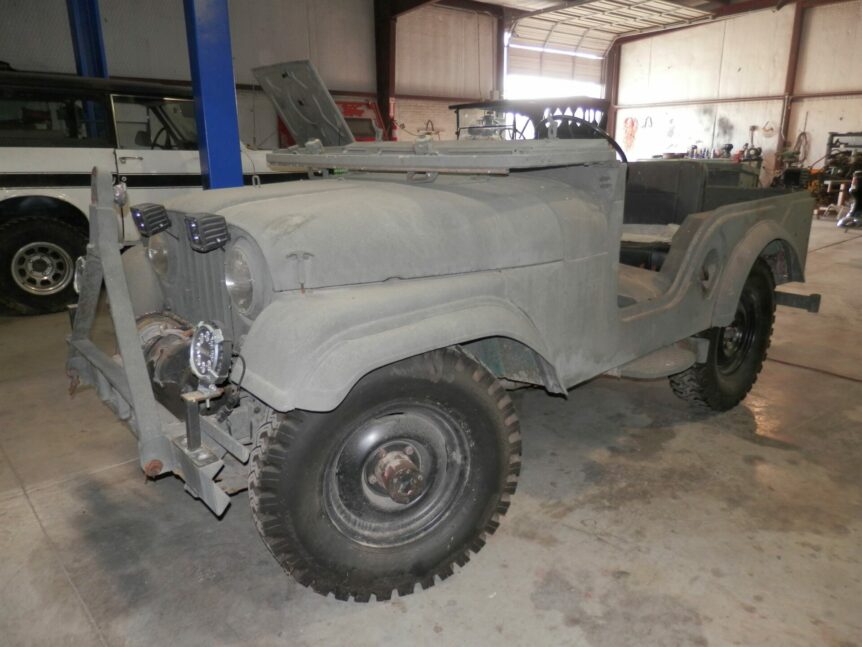 The Jeep CJ models are both a series and a range of small, open-bodied off-road vehicles and compact pickup trucks, built and sold by several successive incarnations of the Jeep automobile marque from 1945 to 1986. The 1945 Willys Jeep was the world’s first mass-produced civilian four-wheel drive car.

In 1944, Willys-Overland, one of the two main manufacturers of the World War II military Jeep, built the first prototypes for a commercial version – the CJ, short for “civilian Jeep”. From then on, all CJ Jeeps consistently had a separate body and frame, rigid live axles with leaf springs both front and rear, a tapering nose design with flared fenders, and a fold-flat windshield, and could be driven without doors. Also, with few exceptions, they had part-time four-wheel drive systems, with the choice of high and low gearing, and open bodies with removable hard or soft tops.

After remaining in production through a range of model numbers, and several corporate parents, the Jeep CJ line was officially ended in 1986. More than 1.5 million CJ Jeeps were built, having continued the same basic body style for 45 years since the Jeep first appeared. Widely regarded as “America’s workhorse”, the CJs have been described as “probably the most successful utility vehicle ever made.” American Motors VP Joseph Cappy said the end of “CJ production will signal an end of a very important era in Jeep history.” The Jeep CJ-7 was replaced in 1987 by the similar-looking Jeep Wrangler.

The similar model, the DJ “Dispatcher” was introduced in 1956 as a two-wheel drive version with open, fabric, or a closed steel body in both left- and right-hand drives for hotel, resort, police, and later United States Postal Service markets.

The Willys CJ-3B replaced the CJ-3A in 1953, the same year Willys-Overland was bought by Kaiser Motors. The Kaiser parent company removed “Overland” from the Willys Motors subcompany name. The CJ-3B introduced a higher grille and hood to clear the new Willys Hurricane engine. A four-speed manual transmission became optional in 1963, at an extra cost of $194. The turning radius was 17.5 ft (5.3 m). Until 1968, about 196,000 CJ-3Bs were produced, of which 155,494 were assembled in the U.S.

The CJ-3B was turned into the M606 military jeep (mostly used for export, through 1968) by equipping it with commercially available heavy-duty options, such as larger tires and springs, and by adding black-out lighting, olive drab paint, and a trailer hitch. Shipments of the M606 militarized version of the Jeep CJ-3B, exported for military aid under the Mutual Defense Assistance Program, accounted for a substantial percentage of the limited CJ-3B production in the 1960s.

We will be working on the engine, brakes and replacing the body with a new one.

We removed the tires to take a look at the brakes.

The fenders have been removed.

The body has been removed.

Power washed the frame to remove the excess debris

Replacing the old brakes with some new brakes.

We have gotten the steering column installed.

We have epoxy sealed the frame.

Teh chassis has been painted black.