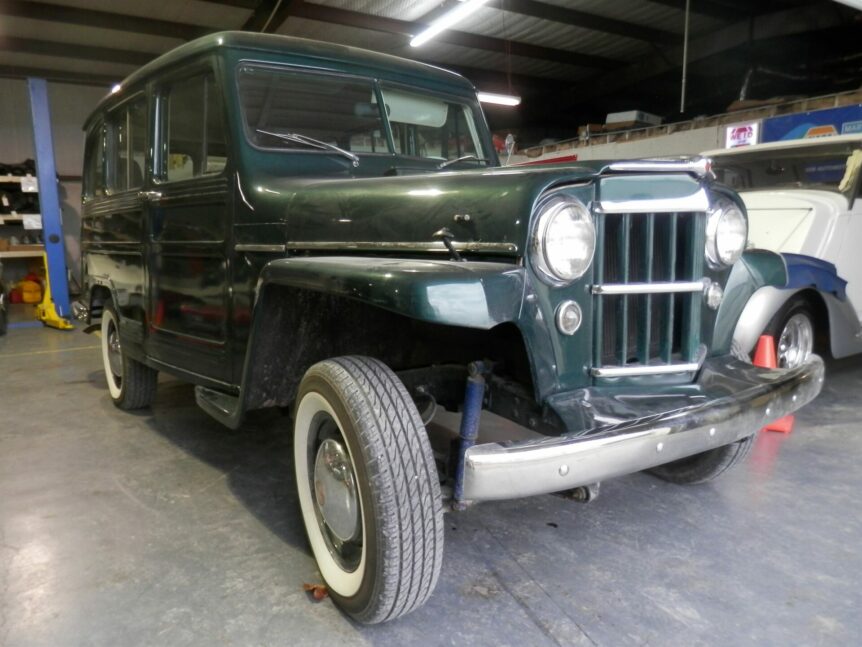 The Willys Jeep Station Wagon, Jeep Utility Wagon and Jeep Panel Delivery are automobiles produced by Willys and Kaiser Jeep in the United States from 1946 to 1964, with production in Argentina and Brazil continuing until 1970 and 1977 respectively. They were the first mass-marketed all-steel station wagons designed and built as a passenger vehicle.

With over 300,000 wagons and its variants built in the U.S., it was one of Willys’ most successful post-World War II models.

For some time after the 1949 introduction of a four-wheel drive option, the 2WD was sold as “Station Wagon”, while the 4WD was marketed as “Utility Wagon”. The 4WD Willys Jeep Wagon is often considered the first production sport utility vehicle.

In 1955 a number of new models were added. The 6-226 model lineup gained stripped chassis, flat face cowl, cowl/windshield and ambulance models. The 475-line received only the cowl/windshield. Willys withdrew from the passenger car market and renamed the vehicle the Utility Wagon. The seventh seat and the overdrive were deleted, and the Planadyne front suspension used with the two-wheel drive wagon was replaced with a beam axle. Warn hubs, with which the front drive mechanism could be disengaged by turning the hubs by hand, became optional on four-wheel drive models.

We will be removing the engine, new wiring harness and doing a disk brake conversion.

In the process of engine removal, we have removed the grille/core support for easier access to the engine.

We have gotten the engine and transmission removed.

Mocking up the transmission to secure proper fittings for the new crossmember and engine.

With the new engine, we have had to box in the frame since a newer 4.3L V6 engine is going in.

The crossmember has been installed on the new 4.3L V6 engine.

New coil over shocks have been assembled and waiting to be installed.

The oil sender has been relocated.

We have boxed in part of the chassis for the new engine mounts.

Ready to mockup the engine and transmission.

The engine and transmission are installed and mocked up.

The shifter is being mocked up in the cab.

Mocking up the brake booster on the firewall.

The battery tray has been relocated.

The master cylinder has been installed.

The intake manifold and distributor have been installed.

Working on organizing the wiring under the dash.

The fenders and grille have been mocked up.

The fuse box has been installed under the dash.

Transmission cooler and lines, horn and relay, power junction and dipstick tube have all been installed.

The gauge cluster and speedometer are installed in the dash.

Mockup of the rear end under the car.

Fabrication and mockup of the rear axle set up.

We have welded on the new fabricated mounts on the rear axle.

The rear axle has been painted.

The gas and brake pedals have been installed.

The controller for EFI installed and the custom steering column plate is being built.